I did an 8-day sprint to launch my Build a Ruby Gem email course and documented my progress through this series of blog posts.

I’m tired. Getting up around 5am all week has worn on me. Yesterday I felt like zombie…and it was mostly my own fault because I didn’t make it a priority to get bed a decent hour.

I’m not sure about you, but I function best with 7-8 hours of sleep. I generally can’t sleep longer than 8, and anything less than 7 is OK for a day or two, otherwise, it catches up with me. I think that’s what’s going on here…

Having realized this, I got to sleep last night around 9:30pm. I figured I’d sleep in until 6am or so, but naturally woke up around 5:15am. So while I’m feeling better this morning, I’m still feeling the side effects of not getting enough sleep from the first few days of the week.

I’ll be more cautious of this for the rest of the week and see if I can get back to a normal (whatever that means!).

What I Accomplished Today

Like the previous days, I was able to write Day 4 of the Build a Ruby Gem Email Course. I had a bit of trouble getting in to the flow of writing this morning. I’m not sure if it’s due to the lack of sleep mentioned above, or just a little speed bump in the normal creative process. It took 15 min. or so until I felt like words were coming out naturally.

Changes to the Email Course

On Day 3, I realized I hadn’t gotten to the meat of the Ruby gem and was still writing about important, but somewhat theoretical topics. It occurred to me that it’s probably best not to cut the content, but rather, extend the course. So instead of a 5-day course, it might be 6 or 7. My goal is write the best content possible and if after 7 days, I feel like I’ve covered the topic thoroughly, I’ll wrap it up.

One thought that has crossed my mind is removing some of the content for an ebook. I could make the course somewhat abbreviated, while offering the book as an up-sell to those interested in the details. I’ll think about this some more and once the course content shakes out.

Additionally , I thinking about spreading the course out. So rather than send 1 email a day, shoot for every 2-3 days, so that I can market the course as a 14 or 21-day email course. I also feel like the people that will get the most value out of the content would benefit from extra time in between each lesson.

Visits were slightly down yesterday, and I suspect the allure of the announcement has worn off.

Thinking more about it, I’ve not been great at seeking out marketing channels for people that might be a good fit for the course. I’ve been posting to the same channels, which has produced a decreasing level of interest over the past 4 days. Truthfully, I’m pretty worn out by the time I finish the email course lesson and this update post, so it’s difficult to get worked up for that. But I’ll think more about it and report back.

The mailing list is up to 82 subscribers, so while the growth is slowing, it’s still a 10% lift over the previous day. This, too, probably reiterates my need to find users elsewhere.

I setup the subscription form to track what page the user was on when they subscribed. Subscriptions are coming from all over the place. It appears that even after 4 days, people are still landing on the first post of the series and converting. 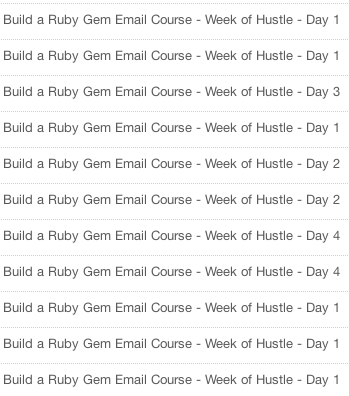 Again, Reddit appears to be the best source for both traffic and conversions. 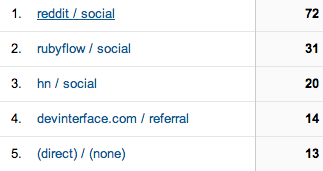 Once the email course is live, I’ll make a better effort to market the landing page elsewhere. I think these updates may be better suited for a different target audience anyway.

The end is near!