I did an 8-day sprint to launch my Build a Ruby Gem email course and documented my progress through this series of blog posts.

I let myself sleep in until 5:30am this morning ;) I spent a few very unsuccessful hours wrestling with Wordpress last night and didn’t get to bed at the time I wanted. However, all is well. I was able to push out Day 4 of the Build a Ruby Gem Email Course without issue.

One of the things that I’m noticing about putting the course posts together is how much the content relies on outside resources. Whether it’s an external URL, the output of a command prompt, or a diff on Github…getting those together is a non-trivial amount of time.

A side effect of getting up early is that by 7:30am (when I’ve typically finish this post), I feel really productive. At this point, I’ve worked for 2 straight hours, all of which have been highly focused. So at 7:30am, I take a break, get some breakfast and take a shower and “start” the rest of my day. It feels like the day starts out on a better foot as a result.

I’ve also found that I’ve been able to focus better early in the morning vs. later at night. I know this is personal thing, some people do their best work in the wee hours of the night. Not me, I’m a morning person and have embraced it. My productivity in the morning is probably 2-3x that of my normal productivity during the day. I’m not sure if it’s because I’m refreshed or fewer distractions (it’s dark, no TV, no social media, no other windows open…).

What I Accomplished Today

I pushed out the latest day of the email course. I feel like it’s just starting to get in to the thick of things. I’ve been really sensitive to the fact that not every person that takes the course will be a Ruby veteran. Hopefully the detailed discussions on load paths and basic installations won’t detract from the value for those that are.

Yesterday I mentioned the non-optimal formatting of my email campaigns on mobile devices. I spent some time with Mailchimp last night and applied a more responsive template to the campaign. It’s better, but still somewhat finicky in the iOS Gmail app. I’ve sent a support request and hopefully I’ll have that ironed out soon. But for those on every other platform, you should’ve had a much better reading experience!

As I expected, the growth of both the mailing list and page views slowed down a bit.

I’m sending the daily update campaigns at 8pm. I didn’t put much thought in to this time, other than the fact that I stumbled on an email marketing post that suggested the hours between 8-12am get the best open rates. According to the campaign report, the open rate is doing well, as compared with the average. However, I have a tendency to believe it’s more due to the nature of the opted-in target audience. This is a very specific topic that people specifically wanted to read about. So it makes sense to me that the open rate would be pretty high.

Reddit continues to be a positive source of traffic. I had haphazardly posted to Reddit in the past, but it’s been driving more traffic than any other source. Along with views, it’s also yielded one of the highest conversion rates for the mailing list. So I’ll continue to post my updates there. 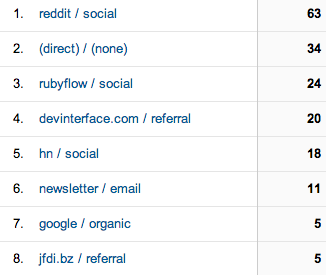